We were recently contacted by Entre’Vue, an association whose mission is to protect and promote the historical heritage of Saint-Louis, Senegal. The association is known for organising the “Histoires Partagées Festival” (Shared Stories Festival) and the open door days in the city’s landmarks.

They wanted us to imagine digital tools that could help them protect and transmit the remarkable history of this former colonial capital added to the UNESCO World Heritage list in 2000.

Our first analysis was simple: tourists from across the world come to visit Saint-Louis for its architecture and distinct aesthetic.

This is why we wanted to propose a digital experience that encourages tourists to leave their hotels and wander through the streets to discover the hidden treasures of Saint-Louis.

To make the most of their trip, tourists can now access a web app called Touki.

The home page proposes 8 circuits built around the historical landmarks and the cultural heritage of Saint-Louis:

We had just spent a couple days in Paris when we started working on the project, and were inspired by the French capital’s metro map for the design of Touki’s circuits. We associated a number and color to each circuits, giving users simple visual reference points to orient themselves seamlessly in the app (and in the city).

These pedestrian circuits are therefore presented as “metro lines” with “stops” for each of the historical landmarks tourists can visit. 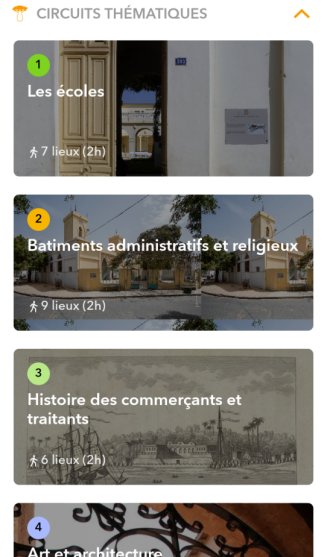 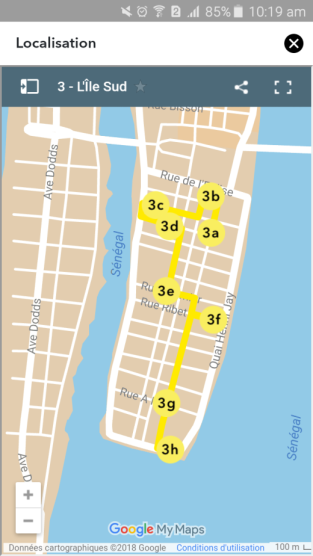 Challenges in UX and development

To spice up our mission, we were given 1 month to deliver the app in time for the Saint-Louis Jazz Festival. This festival was the opportunity to share our app with as many tourists as possible!

Therefore, we needed to stick to something simple, and developed a mobile web app instead of a native mobile application. This allowed us to reduce the development time, but also propose an experience adapted to tourists who are just passing by Saint-Louis.

A mobile web app is accessible from any smartphone, regardless of the operating system, and doesn’t require a lot of data or any memory to download.

So if you’re preparing to visit Saint-Louis, don’t forget to check out the Touki Saint-Louis web app to discover the city in a new way!

You can also contact the young volunteers of Entre’Vue who will be glad to guide you for a day.

If you have any feedback about Touki, don’t hesitate to reach out. We will be making improvements to the app in the near future!

One thought on “Touki – UX design of a tourism app”